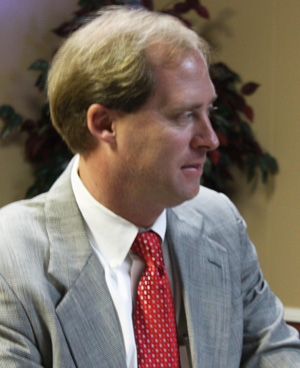 Produce, chicken, and construction prices aside, the severest impact of the The Beason-Hammon Alabama Taxpayer and Citizen Protection Act, as Alabama's new immigration law is known, could be on businesses. Some penalties for violation are “the death penalty for businesses,” Jonathan Lowe told the Haleyville Area Chamber of Commerce Friday.

As to education, Russ O'Rear, HMS Principal, told the Chamber that effective September 1, new students must provide a birth certificate. “There's a box in a database; we're a reporting agency,” O'Rear said. Since this act came into force, less than five students have withdrawn or been affected.

Shortly after the U.S. District Court ruling in September, Haleyville Police Chief Kyle Reogas said that he is awaiting state-approved training on enforcement before proceeding.

Lowe, a local attorney and the city's Municipal Court Judge, gave the Chamber an overview of the parts of the law that are currently enforceable. Of the law itself, Lowe said, “There are lots of good things and some negative things.”

Sections 9 and 15 are central to the law. Basically, they prohibit employers from knowingly hiring, employing, or continuing to employ unauthorized aliens. And the penalties are severe. Companies that violate the act can lose contracts with the state, be sued by the Attorney General, and, for second or subequent violations, can lose their licenses to do business in the state.

According to Lowe, the best way for business to get ahead of this law is to sign up for E-Verify now, rather than wait for the 2012 mandate. Employers who do so “have a presumption of compliance,” Lowe said.

Of course, this can be mooted at any moment. The United States government has sued Alabama to have the law declared unconstitutional. The District Court has upheld some parts and enjoined enforcement of others. Now, the case is before the U.S. 11th Circuit Court of Appeals. In all likelihood, this case will end up before the U.S. Supreme Court.

Is there good news? According to the law this “shall not include casual domestic labor performed in a household on behalf of the occupant of the household or the relationship between a contractor and the employees of a subcontractor performing work for the contractor.”