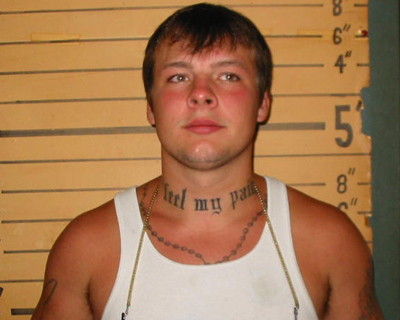 A Friday night fight in the parking lot behind the Dixie Theater ended with a stabbing. Chad Edwin Gardner, 20, of Haleyville, is in Winston County Jail charged with 1st Degree Aggravated Assault for the stabbing of Zackery C. Camp, 20, of unknown residence.

Haleyville Police Chief Kyle Reogas said that a fight between two other people led to the incident. The fight broke out in the parking lot behind the Dixie Theater around 10:55 PM, Friday, July 15. Gardner and Camp then reportedly joined in the fight. This led to Camp being stabbed.

HPD Officer Eddie Collins was patrolling the area when flagged down by a motorist informing him of the stabbing. He was subsequently told that the victim had been driven to the emergency room. At Lakeland Community Hospital Emergency Room, Collins found Camp, who was being treated for a single stab wound to his left mid-torso. Several witnesses to the stabbing were also present and were subsequently interviewed at police headquarters.

On Monday, HPD obtained an arrest warrant for Gardner. On Wednesday, at approximately 2:15 PM, Gardner surrendered to HPD at headquarters. He was booked and transported to Double Springs.