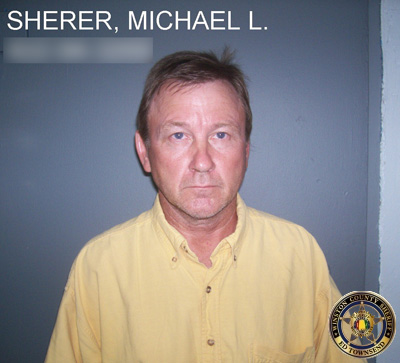 Michael L. Sherer, 51, an escapee from Winston County Jail wanted for murder in Walker County, is in the custody of the Walker County Sheriff's office and en route back to Alabama. According to Lt. Derrick Austin of the Hampton (Ga.) Police Department, Sherer waived extradition at a hearing this morning and was turned over to investigators from Walker County.

Winston County Sheriff Ed Townsend was informed late Thursday morning that Sherer had been apprehended without incident in Hampton, Ga. Vendors setting up for Sunday’s Emory Healthcare 500 NASCAR race at Atlanta Motor Speedway became suspicious when Sherer tried to sell them a .22-caliber pistol. They notified police who apprehended him.

The arresting officer "knew something wasn't right about him," said Austin. Sherer told police his name was Thomas Lynn Smith but gave different dates of birth. Smith is the name of his 57-year-old uncle he allegedly murdered. "The officer didn't know who he had," added Austin.

The murder of Smith occurred on August 24 at the home that was shared by Smith and Sherrer's grandmother on Edgehill Road in Walker County.

Hampton Police recovered Smith's billfold, and the rifle believed to have been used in the murder. Smith's van was subsquently located at a hotel in Hampton. Sherer told Hampton Police that he traded the pistol for two tickets to the race. The pistol has not been recovered.

Accoring to law enforcement sources, Sherer left Walker County the day of the murder and drove to Montgomery. "We've been chasing rabbits," said Sheriff Townsend. "He was out of the area within 30 minutes of the murder."