Ward Selected as #24 Recruit in the Nation 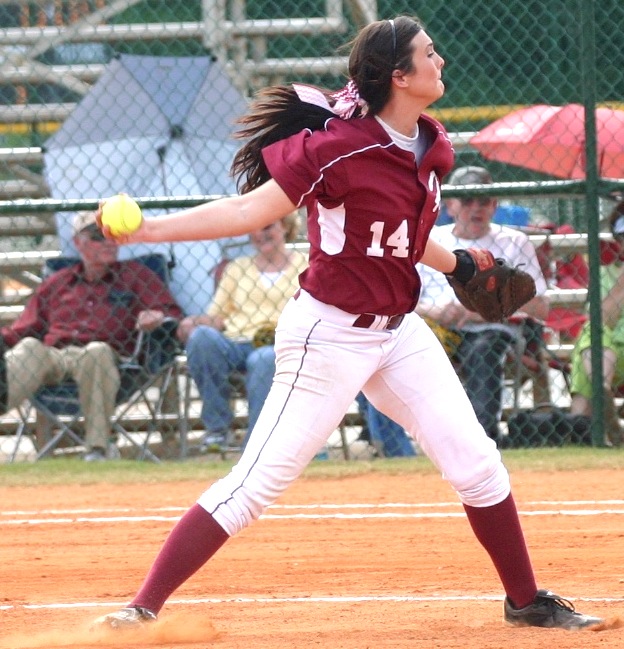 Holly Ward is the standout pitcher for the Haleyville Lady Lions Softball Team. Holly has led her team to back to back state titles in 4A Softball, and she earned the MVP award the past two years as well. As Holly's senior season approaches, she is looking forward to another great season with the Lady Lions, but she was recently surprised with yet another honor.

Lady Lions' Coach Kelly Rushing stated the bar is set high for expectations this year.  Although expectations can be a curse, he knows Holly always rises to the occasion and will do her best to achieve her personal and team goals. He also stated, "I'm not big on individual awards in team sports, but Holly is very deserving of any she receives. This award is a testament to her great skills and ability and gives our school much deserved recognition."

Holly is currently working with Kerri Foster for additional pitcher's coaching. Coach Foster stated Holly is one of the most coachable athletes she has seen and is very hard-working and determined. Foster also stated, "She sets goals and achieves them and is one of the best pitchers I have ever worked with."

Holly has verbally committed to Mississippi State University and is expected to officially sign with them in November. Holly says she is undecided about what she will major in at MSU, but she wants to be successful both on and off of the softball field while attending MSU.  Ultimately, she would like to become a pitching coach at the collegiate level.

Before she made her decision, Holly was recruited by MSU, Ole Miss, South Carolina, LSU, Florida State, and Houston. Alabama, Georgia, and Tennessee had already committed to their pitchers. Although Ward has not officially signed with MSU, her mother, Tracie Ward, says she just doesn't see anyone being able to sway her to another school.  Tracie stated, "Honestly, I don't think any team could pull her away from MSU or Vann." (Vann Stuedeman is MSU's Head Softball Coach.) "She knows Vann's history of making great pitchers. At the MSU camp, Holly said Vann improved every one of her pitches. That was the key. She wants to get better. She knows she has to keep improving to compete at the next level. "

Tracie also stated the most common questions they hear are about why Holly didn't choose the University of Alabama and how to get their child seen by the right people. As stated above, UA had already committed to a pitcher when Holly began making big appearances during her sophomore year. Which in turn brings up another point. It's never too early to start looking at colleges. Tracie said it is important not to wait for colleges to contact you.  You have to go to them.  They have thousands of athletes across the nation competing for their attention, so if you want your child to be seen, you have to get their attention first. Holly made national appearances with her travel teams, and the travel coaches also helped with contacting the Division 1 schools to get more attention on Holly and by providing videos for them to review. Winning back to back state titles with the Lady Lions definitely gave Holly more attention as well.

Holly talked about the things that have made her successful.  She stated, "Everything I've worked to have and everything I'm working to have, I owe to my parents. I would be nothing without their love and support! To everyone who has ever coached me or is coaching me, thank you for everything you've done!" She also stated she loves Haleyville and has been successful with the help of her teammates. Holly wants to finish her high school career with a bang, but she knows it will take the help of her teammates to continue what has become nothing short of a Haleyville High School tradition.

As a final note, Holly stated, "I want to be a good role model for any little girl who has a dream because dreams do come true."

Congratulations on your success, Holly! We are so proud of you.