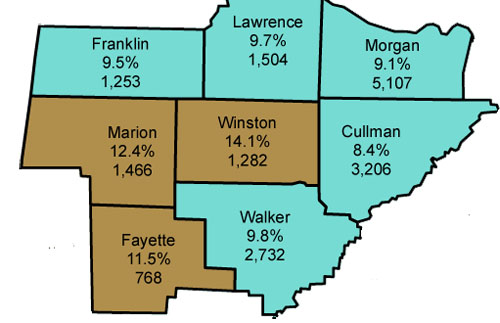 (MONTGOMERY) The unemployment rate in Winston County hit a 17-month low in September, dropping, for the seventh straight month, to 14.1%.7,828 people reported employment for the month. The statewide rate fell again, to 8.9%, its lowest since February, 2009. The nationwide rate held 9.6%, reflecting 14,767,000 people actively seeking work.

Alabama Department of Industrial Relations Director Tom Surtees said, “This is the fifth month in a row that Alabama has seen a decline in its unemployment rate.” He added, “Once again, our rate is below the national average of 9.6%, and we recently had some good news that several of our Metro Areas have experienced some of the largest drops in unemployment in the nation.”

The Bureau of Labor Statistics recently reported that five of the nation’s top 10 metropolitan areas with the biggest declines in unemployment are located in Alabama. These Metro Areas are: Florence-Muscle Shoals, Decatur, Anniston, Gadsden, and Tuscaloosa. “In addition to all this good news, our statistics are looking pretty good, too. Our firsttime claims are at the lowest point in two years, and our benefit payments are the lowest we’ve seen this year,” Surtees continued.

Governor Bob Riley said, “Alabama not only has an unemployment rate that is lower than the national rate, but our unemployment rate is falling faster than any other state. In just five months, unemployment in Alabama has fallen by 2.1 percentage points. This sharp decline is a positive sign our economy is getting back on track and Alabama is headed in the right direction." Riley added, "We've got a big announcement next week."