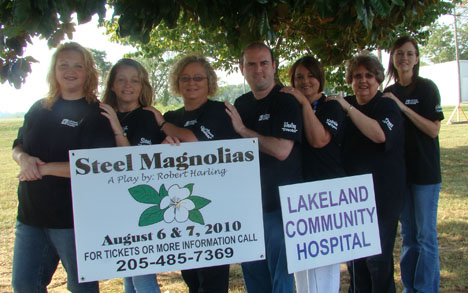 Lakeland Community Hospital presented Steel Magnolias by Robert Harling in August and raised $2,700 for the 2011 Relay for Life. “It was great success and we would like to thank everyone who supported the event,” LCH's Wesley Harbin said.

“We hope that Haleyville enjoyed the play as much as we did performing it,” Harbin added. Harbin also wanted to thank Haleyville Elementary School for allowing rehearsal and performances. Harbin also said, “We want to urge everyone to continue to support Relay for Life events so research may continue to fight Cancer.”