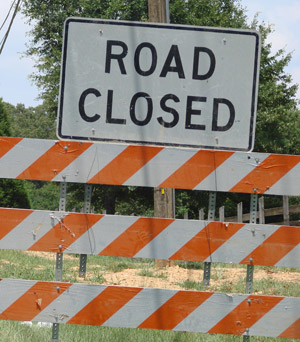 Drivers ignoring the "Road Closed" barricade have caused delays to the "Blake's Curve" project on Newburg Road by running over survey markers. The construction company has now re-surveyed the road bed and grade three times because markers were knocked out of place or destroyed by drivers who have driven on the closed road.

Haleyville Police Chief Kyle Reogas has announced that police will step up enforcement in the area. "I know that the road being closed is an inconvenience," Reogas said. "But drivers going around the sign is prolonging the inconvenience."

Drivers who ignore the fact that the road is closed will be cited for violation of Ala. Code § 23-5-2. This includes driving around and/or moving the barricade. Violators can be fined up to $100 and imprisoned for up to 30 days.

For those who may not know what a "Road Closed" barricade is, one is pictured at the top of this story. And for further clarity, the Code says "Any person who wilfully destroys, knocks down, removes, defaces or alters any letters or figures on a detour or warning sign set upon a ... road ..., or who wilfully knocks down, removes, rearranges, destroys, defaces or alters any letter or figures on a barricade or fence erected ..., or who drives around or through any barricade or fence ... or drives around such detour sign or barricade or fence or any person who wilfully ignores or disregards a warning sign before such road has been officially opened to the public traffic ... shall be guilty of a misdemeanor."