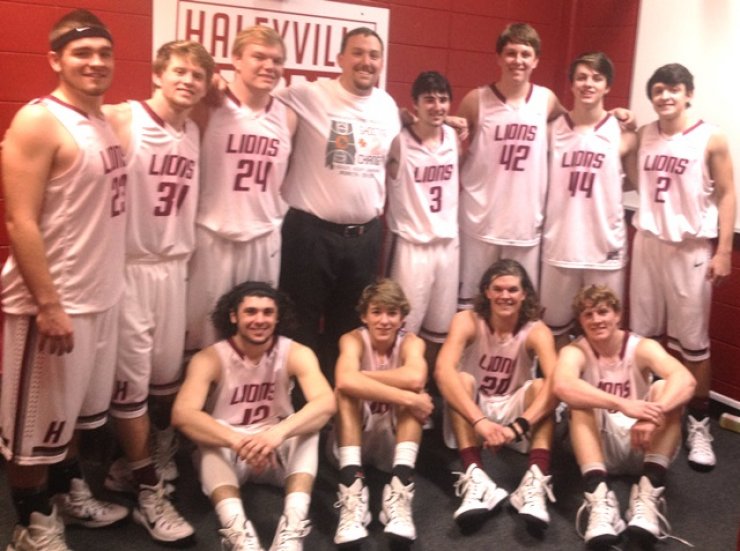 As the Haleyville Lions prepare for tonight’s sub-regional game, we took the time to discuss a spectacular season for the Lions with Coach Dusty Ball. He is very appreciative of the support the community has given this season, and he hopes to see the stands full of fans again for tonight’s big matchup. Tipoff is set for 7:00 p.m. at the Haleyville High School Gymnasium as the Lions face the Deshler Tigers for a chance to advance to Hanceville for the state playoffs. If you are unable to attend, be sure to catch the live play by play coverage with David Albright and Craig Wakefield on Paradise 92.7.

1. This team has been able to accomplish great things this season including winning the area championship for the first time since 2008. How has the game attendance been? I’ve heard great things about the crowds, specifically the student section, this year. Would you care to talk about that a little?

Attendance at our games this year has been very good, especially the last few games and the area championship game. I believe that is a result of our community support for all of our athletics and the continued success we have experienced over the last few years.

Our student section and cheerleaders have done a wonderful job of buying into their role for our team. They are definitely a positive influence on our guys when the game is close and they do a very good job of being a hindrance and a distraction for other teams during games which only adds to our home court advantage. The area championship game was an especially electric atmosphere for our guys to play in, and I believe it helped us to excel and provided an extra level of energy for our players. It was the type of environment which all players relish playing in and the type of environment we, as a basketball program, are trying to establish moving forward.

2. As a first year head coach of the varsity Lions, many people expected an average season and some even thought it would be a “rebuilding” season. Did that make you want to win even more? How does making it this far make you feel? What things were in place to make this a successful season?

Well, one of the main reasons I took this job when it became available was the fact that I knew this season could be something special. While we graduated some very talented players last year, we also knew there was a returning nucleus of players that were anything but average. We have a very athletic group of guys that can cause problems for other teams with the way they defend and cause matchup problems for other teams defensively.

Obviously having Jordan Brimer back and healthy for us this year was a big deal. He allows some of our other guys to play more natural positions that allow them to be more effective playmakers. It is also nice to have guys like Jonas Dodd to go along with Jordan that have so much experience that they are like coaches on the floor because they understand what is supposed to be happening and can get us where we need to be as a team within the game.

It is always nice to have some success in our first year and winning the area championship is a very special feeling because it validates all the hard work we have put in to making our basketball program as successful as all the other programs in our school system. It is a tangible step in the right direction and hopefully we can continue to build upon that success.

3. How many seniors do you have? Who were other team leaders through the season? Have there been any injuries that have made impacts on the season?

We have five seniors on this year’s team; Jonas Dodd, Walker Hughes, Adam Broyles, Conner Kiser, and Dillon Posey. We have been very fortunate to go through the year as healthy as we have, not having any serious injuries that have affected our season.

4. The Lions will face the Deshler Tigers at home tonight. Has Haleyville faced Deshler yet this season? If so, what was the outcome of that game(s)? What is the key to coming out with a big victory tonight?

Fortunately for us, we have played Deshler twice this season, but we have come up short both times, losing by a combined three points. We match up well against them and could very easily have won both games, but we let them slip through our grasp. A big key to this game will be the rebounding battle and our ability to limit their second and third chance points. In both of the previous games, it was their ability to score off of rebounds that ultimately put them over the top. We have been playing some really good basketball the last few weeks, and if we can control the boards tonight limiting their ability to score on rebounds,  then I like our chances to advance against a really good Deshler basketball team.

5. If the Lions win, what happens next?

If we win we get the opportunity to represent our school and community at the Northwest Regional Tournament in Hanceville on Saturday, February 14th at 1:30 p.m. You can follow along with the state tournament brackets on al.com which has an interactive bracket that is updated after each round.

6. If the Lions lose, what happens next?

Unfortunately if we lose our season will be over and we will begin working toward making next season as successful as possible.