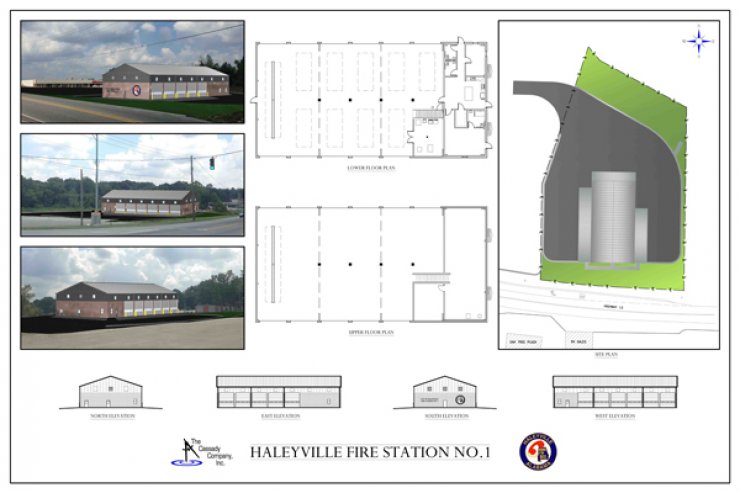 With the purchase of the Haleyville City Hall and fire station property by CVS, work is underway on the new facilities for both. The new city hall is being constructed on top of the safe room in the parking lot behind McDonald's. The new Haleyville Fire Station No. 1 is being constructed on the east side of the Haleyville Shopping Center parking lot at the interection of Highway 13 North and 6th Avenue. Mayor Ken Sunseri stated inclimate weather has delayed the construction, but should be completed by April 1.

Featuring five large bays, four of which will be drive though, the new fire station will be considerably larger than the present station behind city hall. The drive through bays will allow the fire trucks, which includes the ladder, pumpers, and brush trucks to be parked inside without having to back them in. The cost is approximately $700,000.

The Haleyville Water Department is preparing to move into a completely new facility on Alabama on the site where the first water storage tower was located. Ribbon cutting for the building will be later this month. City Hall personal will be operating temporary from the Neighborhood Facilities on Highway 13 South until the new city hall is complete. The Haleyville Fire and Police Departments will continue to operate temporarily from their present location at city hall until the move can be made to their respective new buildings.