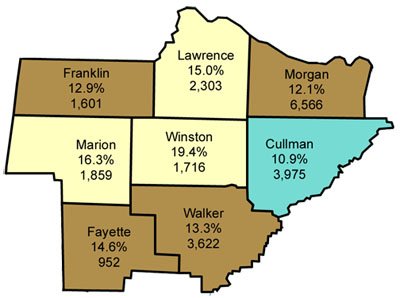 MONTGOMERY – The unemployment rate for Winston County rose to 19.4% in February, up from January's rate of 18.9%, and a 20-year high. Meanwhile, employment in Alabama as a whole increased for the first time in three months.

Alabama Industrial Relations Director Tom Surtees announced that wage and salary employment in the state increased by 11,300 over the month with the majority of the monthly upturn resulting from employment gains in professional and business services, government, leisure and hospitality, manufacturing, and educational and health services. Neighboring counties and their rates are Cullman, 10.9%; Fayette, 14.6%; Franklin, 12.9%; Lawrence, 15.0%; Marion, 16.3%; Morgan, 12.1% and Walker, 13.3%.

Surtees also announced that Alabama’s unemployment rate for February remains unchanged at 11.1%.  This rate represents 227,717 unemployed persons.  “We are starting to see some consistent signs that our economy has begun a rebound,” said Surtees.  “Our state showed employment gains for the first time in three months.  In addition, new unemployment benefit claims have fallen 61% since the third week of January,” said Surtees.