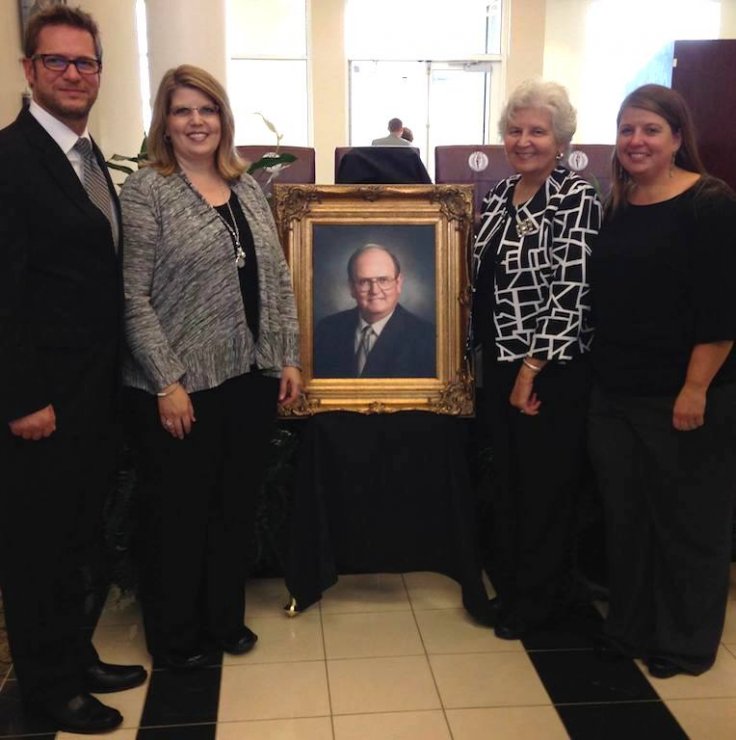 TROY - Tommy Ledbetter, the late Dr. Paul Hubbert and the late Gary Warren were inducted into the Alabama Educational Leadership Hall of Fame at Troy University during a ceremony on Thursday in Jack Hawkins, Jr. Hall on the Troy Campus.

Established in 1982, the Hall of Fame is a cooperative effort of Troy University, the Alabama Association of School Boards and the Council for Leaders in Alabama Schools to recognize and honor the achievements of outstanding leaders in education within the state. The first induction ceremony was held in April 1984. Portraits of inductees are displayed in Hawkins Hall, home to Troy University's College of Education.

"We are here today to recognize those who have had a tremendous impact on education in this state and made a difference in the lives of our children," said Dr. Jack Hawkins, Jr., Troy University Chancellor. "If you look around you on these walls, you see the portraits of the 39 inductees to date. Today, we honor three more that will join their ranks – three whose influence on education will continue to be felt for years to come."

The ceremony included welcoming remarks from Dr. Kathryn Hildebrand, Dean of Troy University's College of Education, comments from Dr. Hawkins and the presentation of inductees by Pam Doyle, Vice President of the Alabama Association of School Boards, Richard Dennis, Principal of Prattville High School, and, Earl Franks, Executive Director of the Council for Leaders in Alabama Schools. Dr. Hal Fulmer, Associate Provost and Dean of First Year Studies at TROY, served as emcee.

Gary Warren, who passed away in April, dedicated his life to the education and advancement of students in the state of Alabama. He served 22 years as an agri-science teacher, more than 14 years as director of the Haleyville Center of Technology, 20 years as a bus driver and four years as the District 7 representative on the Alabama State Board of Education. A graduate of Auburn University, Mississippi State University and Alabama A&M, Warren was a strong advocate for college and career readiness for Alabama students. During Warren's tenure on the state board, which included a stint as President Pro-Tem, the state launched a Workforce Development Month celebration to highlight community commitment to preparing students for career success. Warren helped promote a bond issue for career tech improvements, supported the establishment of a career tech and workforce development position on the state Department of Education's leadership team, and participated in a career tech summit to improve the industry-education partnership. As a state board member, Warren also helped to adopt some of Alabama's most comprehensive education reforms, including the Students First Act, the Every Child a Graduate Plan, and the Alabama College- and Career-Ready Standards.