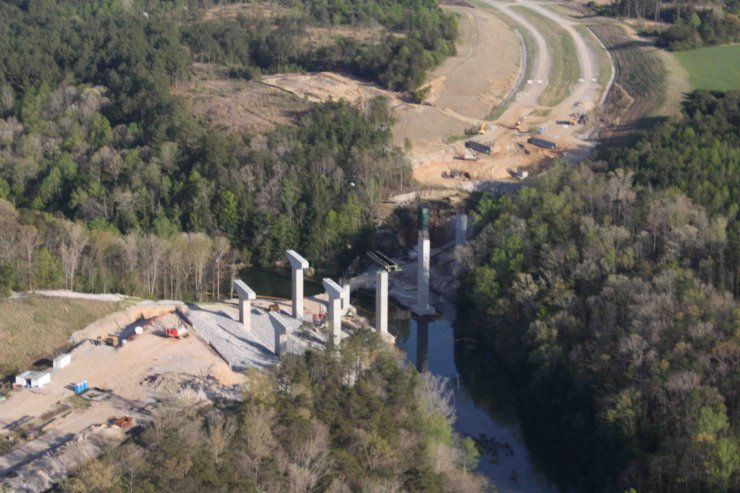 The Alabama State Highway 13 four-lane project dubbed the I-22 Connector and known locally as the "Haleyville Bypass" is still under construction, despite rumors that it was not. One of the last hurdles to completing the first segment of the four-lane is the construction of dual bridges over Gas Branch Creek which feeds into Bear Creek in Franklin County.

Bridges were constructed first over Bear Creek just south of Mon Dye on the south end and then over the Norfolk Southern Railroad on the north end just south of Spruce Pine. The cost of building all three sets of bridges, including the third, is approximately $40 million.

The Gas Branch Creek bridge is being built by Wright Brothers Construction of Charleston, TN. Project Manager Eric Samples stated even with weather and a difficult location, the bridge should be completed by next April. Most of the work on the vertical support columns is complete as can be seen in the aerial photo above. This set of bridges will effectively complete the first segment from Spruce Pine to Franklin County Highway 79.

With funding, not yet allocated, property for the right-of-way will be purchased and construction can begin on the next segment from CH 79 to Highway 195 next to Walmart in Haleyville. This is scheduled outside the five year plan in 2020 and beyond. Haleyville Mayor Ken Sunseri and a group of citizens traveled to Montgomery in an effort to secure funding for the completion of this project. The lobbying party was told this project appeared to be a "road to nowhere" and even if it was completed, there would not be enough traffic to justify it's construction. The priority of funding appeared to be the proposed northern bypass of Birmingham.

The plan from the start was to construct both of these segments, pave them and then open the road for use from Spruce Pine to Haleyville, bypassing Phil Campbell and Bear Creek. At this point, if this happens before the completion of the third segment to Winston County Road 17, south of Haleyville, it will place all the Highway 13 traffic onto Highway 195 from Walmart to the current location of the Highway 13 and 195 intersection.

James Brown, Division Engineer for the Alabama Department of Transportation recently stated: "We have never stopped working on this project." Building a new four-lane highway where no road has existed before is a major project. An even bigger hurdle is the political process of keeping it funded.

Wright Brothers is also the prime contractor for a five lane bridge under construction over the Buttahachee River east of Hamilton. The existing two lane bridge will be replaced over a period of time by the new bridge which should improve traffic flow near Hamilton on Highway 278. Samples stated that project should be completed by next April also.