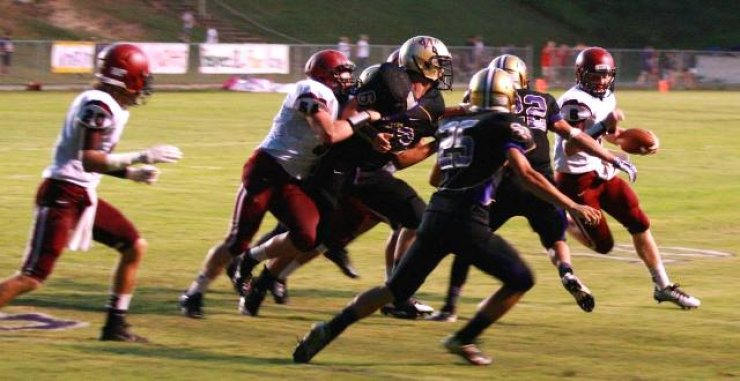 The Haleyville Lions took the field for the first official game of the 2014 season Friday evening against the Winston County Yellow Jackets. The Lions brought home a 43 to 21 victory over the Jackets. Here's a look at the scoring summary for the game.

In the first quarter, Brady Sherrill returned an interception for an 80 yard touchdown and Antonio Reyes made the extra point to put the Lions up 7-0.  Next, the Jackets' Blankenship completed a 10 yard run and McKissak completed the extra point to tie the game at 7 at the close of the first quarter.  The second quarter brought on a lot more action, beginning with a 70 yard touchdown run from Brown and another kick from McKissak to put the Jackets up 14-7. Lions quarterback Conner Kiser completed a 24 yard scoring pass to Dillon Posey, but Reyes missed the kick leaving the Lions trialing 14-13.  Three minutes later, Posey scored on a 68 yard run, and the Lions went for two but could not complete making the score Haleyville 19 Winston County 14. As time expired on the half, Posey kicked a 42 yard field goal to take the Lions up 22-14 at halftime.

The first score of the second half was a Yellow Jackets' Blankenship to Whitman 63 yard pass and a completed McKissak kick to make the score 29-21. That would be the end of scoring for WCHS. The Lions then scored on a Kiser 66 yard run and a kick from Reyes to extend the lead for the Lions 36-21 at the end of the third quarter.  Kiser also had the only scoring drive of the fourth quarter with a 38 yard touchdown run and a completed kick from Reyes to reach the final 43-21 Lions victory.

For more game photos, [CLICK HERE]. We extend special thanks to Dr. Heath Banks for assisting with photography for this game.