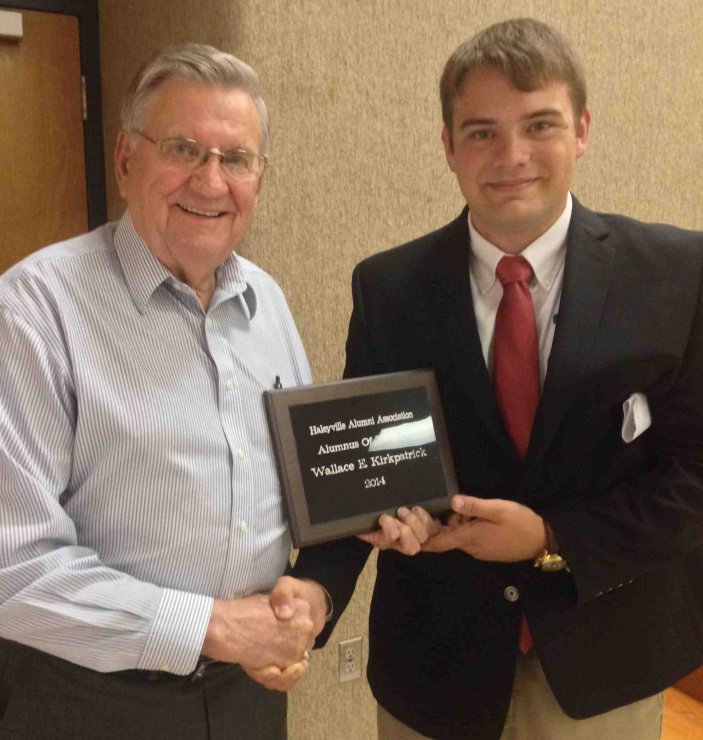 Alumni Day began with many past class members having get togethers on Friday night, a combined alumni and 9-1-1 parade on Saturday morning, luncheon at the HES cafeteria, more parties and many promises of keeping in touch.

At the luncheon, the class of 1964, (50 years) won the most in attendance and most percentage. The distance award went to HHS alumni, Ben Williams, who is a missionary in Ethiopia.

HHS Alumni Association out going president Jonathan Lowe presented David Albright as the recipient of the Service Award for his filming and later videoing the HHS football games, PA announcer at the basketball and volleyball games, and many other contributions of services to the Haleyville Schools for over 30 years.

The Alumnus of the Year was presented to Dr. Wallace Kirkpatrick. Adam Martin outlined the many reasons Kirkpatrick was chosen as the 2014 recipient of the prestigious award.

Dr. Wallace Kirkpatrick was born in Rabbit Town and attended haleyville High School. At a young age he enlisted in the military. Kirkpatrick credits the military with helping him to become focused and to achieve the many milestones in his life.

Kirkpatrick began his professional career in the research and development element of the Redstone Arsenal in 1958. He contributed significantly to the developments in ballistic missile defense advanced technologies for almost 50 years. His work has included assignments in the office of the Secretary of Defense and as a congressional staffer. His experience includes national security policy and program management.

In 1979, he was selected as a a Congressional Science Fellow by the American Institute of Aeronautics and Astronautics, where he served as a member of the professional staff of the U.S. Senate Commerce, Science, and Transportation Committee. He joined the Ballistic Missile Defense organization in Huntsville in 1980.

The honoree is a graduate of the Alabama Leadership Program, 2001-2002. He is chairman of the Board, Huntsville Madison County Marina and Port Authority. He is a member of the UAH President's Council. He has served as a member of the Board of Calhoun Community College Foundation and on the Advisory Council to the College of Administrative Science at UAH.

The honoree is also the past Chairman and a member of the Board of Directors of the Chamber of Commerce of Huntsville/Madison County. He was selected as the Chamber of Commerce Small Business Executive of the Year in 1992. He was the 2008 winner of the Huntsville Rotary Club Vocational Excellence Award. He formerly served as a member of the Board of Directors of Compass Bank. He is a past member of the Alabama Commission on Aerospace Science and Industry is an Executive Board Member of the Greater Alabama Council, Boy Scouts of America.

Adding to his list of accomplishments is the fact that he is a licensed pilot. He currently holds multi-engine, instrument, and single engine seaplane ratings. He has two sons, Steve and Michael, and four grandchildren.