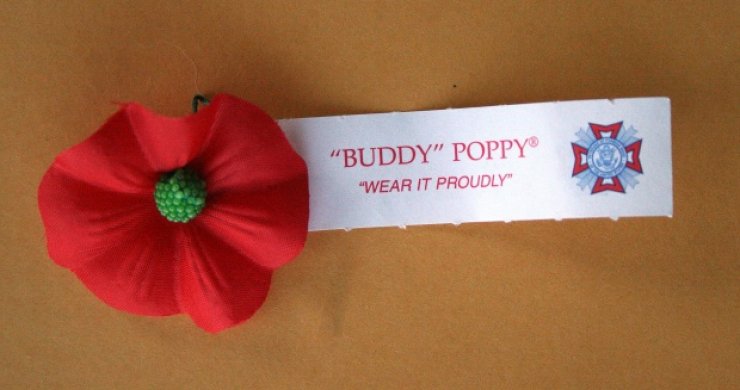 Members of the Veterans of Foreign Wars Post 4543 and its Ladies Auxiliary will be having a Buddy Poppy Drive, Saturday, May 24, 2014 from 9 a.m. until 1 p.m. at the Haleyville Wal-Mart.  The Buddy Poppies are free, and everyone is encouraged to pick one up to wear in honor or memory of a veteran. Donations will also be accepted for the V.F.W. Post 4543 at this event.

The VFW conducted its first poppy distribution before Memorial Day in 1922, becoming the first veterans' organization to organize a nationwide distribution. The poppy soon was adopted as the official memorial flower of the Veterans of Foreign Wars of the United States.

It was during the 1923 encampment that the VFW decided that VFW Buddy Poppies be assembled by disabled and needy veterans who would be paid for their work to provide them with some form of financial assistance. The plan was formally adopted during the VFW's 1923 encampment. The next year, disabled veterans at the Buddy Poppy factory in Pittsburgh assembled VFW Buddy Poppies. The designation "Buddy Poppy" was adopted at that time.

In February 1924, the VFW registered the name "Buddy Poppy" with the U.S. Patent Office. A certificate was issued on May 20, 1924, granting the VFW all trademark rights in the name of Buddy under the classification of artificial flowers. The VFW has made that trademark a guarantee that all poppies bearing that name and the VFW label are genuine products of the work of disabled and needy veterans. No other organization, firm, or individual can legally use the name "Buddy Poppy."

The minimal assessment (cost of Buddy Poppies) to VFW units provides compensation to the veterans who assemble the poppies, provides financial assistance in maintaining state and national veterans' rehabilitation and service programs and partially supports the VFW National Home for orphans and widows of our nation's veterans.