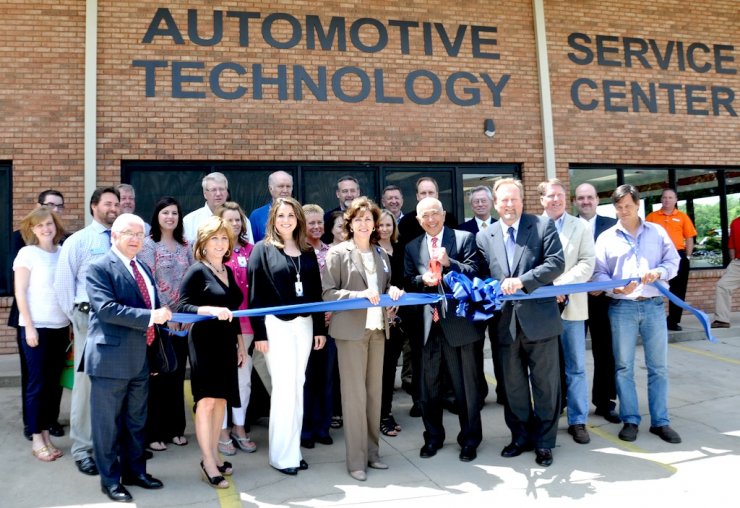 NW-SCC employees and business leaders participate in a ceremonial ribbon-cutting during the grand opening of the newAutomotive Service Technology Center on the Shoals campus.

The opening of the 10,450 square-foot facility which now houses the Automotive Service Technology program was originally constructed in 2005 as the Peoples Tires Brakes and Alignment Center. The floor space contains eight training bays (four for oil change and tire rotation and four for automotive mechanical training), classroom and office area, along with ample storage.

Since 2007, the Automotive Service Technology program has more than doubled in enrollment and the new facility will hopefully help the program reach new heights. “With the addition of our new training center, we hope we not only train more students on industry standard equipment but also provide our industry partners with highly qualified and ATEF certified technicians in the Shoals and Northwest Alabama region,” stated Rose Jones, Associate Dean of Workforce Development. “The Auto Service program includes associate degree, short and long-term certifications and could potentially lend itself to future certifications such as diesel engine certification.”

The expansion of the Automotive Service Technology program into the new facility is the latest on the Shoals campus since the opening and expansion of the new Applied Engineering and Machining Center (building 111) in October of 2010 and the new Industrial Systems Technology program (building 105) shortly thereafter. The acquisition of the building, a venture that cost the College $615,000, included approximately $50,000 in tools and equipment.