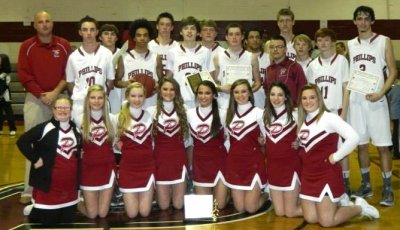 The Phillips Varsity Boys' Basketball Team won the Marion County Tournament Friday evening.  This is the first championship for the PHS Varsity Boys in this tournament in school history. Phillips defeated Hamilton 55-54 in the championship game and were led by Tyler Crumpton with 19 points and 11 rebounds. Individual stats from the championship game are listed below. Phillips had also defeated Brilliant 76-53 and Hackleburg 75-25 earlier in the tournament to secure placement in the final game. Tyler Crumpton, Matthew Martin, and Brayden Shaffer were named to the All-County Team, and Jake Boner was named the Most Valuable Player in the Marion County Tournament.

The Bears will close out the regular season this week with games at Brilliant Tuesday, at home against Hubbertville Wednesday, and at Marion County Friday evening. The area tournament will begin either at Phillips or Belgreen next Tuesday. The Bears are coached by Scott Veal and Adam McCarley.