In April 2011, much of the Haleyville and the surrounding communities was devastated by tornadoes, including Hackleburg and Phil Campbell and their respective schools. Since that time, plans have been put into place, and construction has begun for both schools. Below are photos of the progress that has been made, as well as details provided about each school.  Construction on each school began around the end of July 2013, and the projects are estimated to be about one year. However, the project can be delayed due to weather.

The photo above shows the gym (on the left side) and a portion of the classrooms and locker rooms that will also serve as the storm shelter (on the right side).

The new PCHS building will be 115,000-118,000 square feet and will include about 40 classrooms, a media center, woodworking shop, band room, courtyard, computer lab, science labs, distance learning center, and a gym with a stage.  The building will also contain a storm shelter that can hold 1,000 people. It will be inside the main structure and can be accessed from inside the school. Originally, the plans included an auditorium, but it had to be cut out because of constraints with the budget. 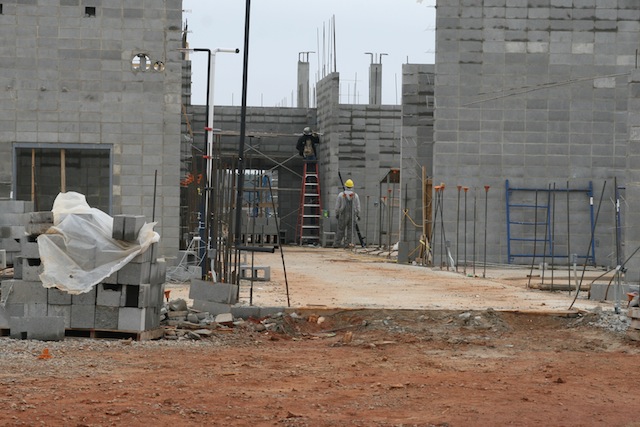 The photo above shows construction workers in the classroom portion of the building.

The new Hackleburg Schools will be combined in one building. There will be 123,248 square feet and will include two gymnasiums (one high school and one elementary), multiple classrooms, and a shared media center for the schools. The design has it planned to be a two-story building, and there will also be a detached storm shelter that can hold 768 people.