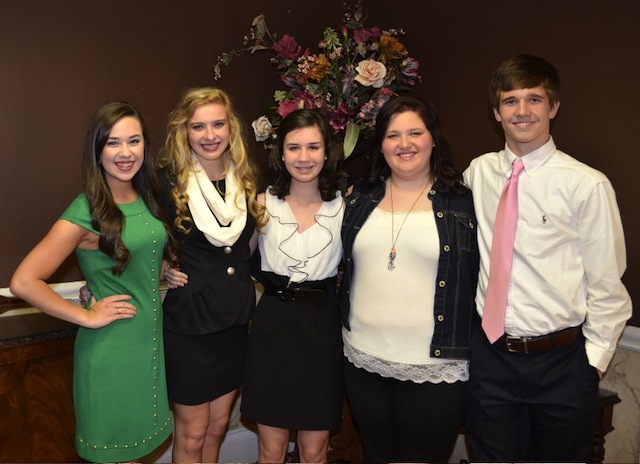 Recently, fifteen Haleyville High School sophomores participated in the HOBY competition for youth leadership. The winners of the competition are shown in the photo above. The winner for this year was Maddie Lowman. First alternate was Amelia Townsend, and second alternate was Allie Barton. Sami Warren won third alternate, and Hayden Ward placed as the fourth alternate.

History of the HOBY Competition:

In the summer of 1958, actor Hugh O’Brian received the invitation that would change his life.

O’Brian, then 33, was in Winnipeg, Manitoba, parlaying his fame as television’s legendary Wyatt Earp into extra income by guest-starring in a rodeo. Then the cable arrived from French Equatorial Africa: renowned humanitarian and 1952 Nobel Peace Prize winner Dr. Albert Schweitzer would welcome him at any time.

O’Brian had long admired the German doctor-missionary-theologian-musician. “I’d read so much about him,” he recalls. “He was a great humanitarian who could have done anything he wanted in the world, and there he was in the middle of Africa taking care of people.” Within two weeks O’Brian was on his way, by commercial airliner, bush plane and canoe, to the famed hospital that Schweitzer had founded on the banks of the Ogooue River in Lambarene. The actor spent nine days at the clinic where Schweitzer and volunteer doctors and nurses, working without electricity or running water, cared for patients, including many with leprosy.

The doctor was impressed that the young American had taken the trouble to visit him. He shared stories and life lessons with O’Brian each evening. Schweitzer, then 83, was concerned about global peace prospects and was convinced that the United States should take a leadership role in achieving peace. He impressed upon the young O’Brian the urgency for change and how education must teach young people to think for themselves. It was an unforgettable nine days. And, as O’Brian departed, Schweitzer took his hand and asked, “Hugh, what are you going to do with this?” Two weeks after returning from his 1958 meeting with Schweitzer, O’Brian put together a prototype seminar for young leaders — HOBY.  And the rest is living history.