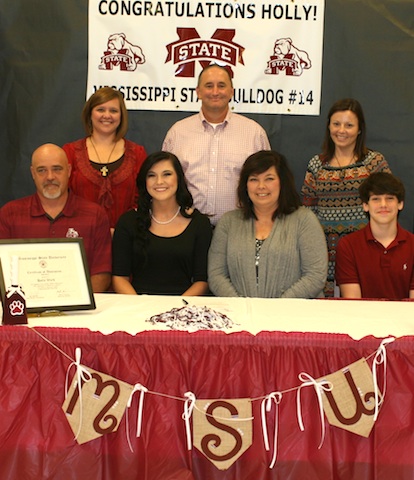 Lions' standout pitcher, Holly Ward, recently signed with Mississippi State University on a softball scholarship. Ward's signing reception was held at the Haleyville High School Library Sunday afternoon, where she was honored by former coaches, teammates, family, and a host of friends.

Ward was also chosen as the number 24 softball recruit in the nation for this year's senior class in a recent www.studentsports.com poll. She was recruited by multiple Division 1 schools including MSU, Ole Miss, South Carolina, and Florida. Ward stated she ultimately chose MSU because she feels it is the right fit for her abilities, and she believes in the coaching abilities of Coach Vann Stuedeman. Her ultimate goal is to go on to become a pitching coach at the collegiate level.

For more information on Holly Ward, check out the recent HBTV article on her accomplishments and honors [HERE].