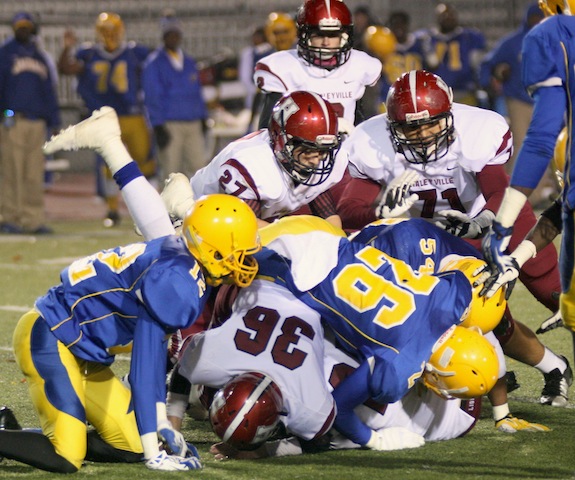 The Haleyville Lions faced J.O. Johnson in the second round of the AHSAA High School Football Playoffs Friday night.  The Lions were defeated to end a great season. Haleyville finished with a 10-2 record for the year.

The entire first half belonged to J.O. Johnson who scored four touchdowns to lead the Lions 28-0 at the half. Two of those TDs were from Conner Kiser interceptions. The Lions opened the second half with Brady Sherrill in the wildcat formation in the quarterback position, and this change gave the Lions a glimmer of hope with effective running from Sherrill.  However, after another Lions turnover, the game slowly ended. Haleyville was able to score twice in the third quarter, with a 14 yard and a 33 yard run by Sherrill. The Jaguars tacked on four additional touchdowns, to bring the final score to 58-14.

Although the season is over for the Lions, it was definitely one to remember. The last time the Lions saw a 10 win season or the second round of playoffs was in 2005. Prior to that, Haleyville only earned 10 wins in a season in 1987, 1960, 1959, and 1952. Congratulations to our Haleyville Lions on a history-making season!

Additional photos and individual stats will be available soon.