Montgomery to be Tried as Adult 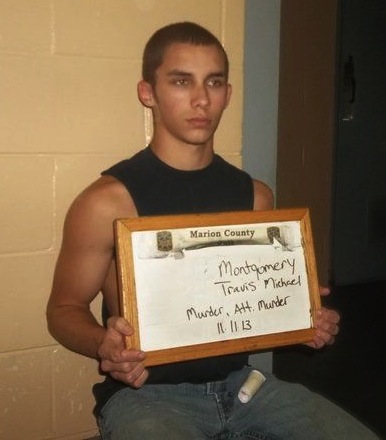 As reported yesterday, Montgomery reportedly stabbed his parents around 11:00 p.m. Sunday night, but they were not found until after 5:00 a.m. Monday morning when neighbors heard Mr. Montgomery screaming for help. At that time, family members arrived at the home and discovered the crime scene. Mrs. Montgomery was pronounced dead at the scene, and Mr. Montgomery was airlifted to UAB Hospital for treatment.  He is currently listed in stable but serious condition after receiving stab wounds to the neck, chest, and back and suffering from a punctured lung.

When officers arrived on the scene, Travis Montgomery was not there. Once the scene was secured, officers from the Haleyville and Bear Creek Police Departments followed leads on Montgomery's whereabouts and located him in a friend's apartment in Haleyville around 11:00 a.m.  Montgomery was taken into custody without further incident, and he is currently being held in the Marion County Jail. He will have his first court appearance Tuesday morning.

According to family members, Montgomery was a well-liked person, and they are still shocked by his alleged actions. Also according to his family, the stabbing took place after a family argument. Montgomery's parents were pushing for Montgomery to enter an anger management class, and he was not willing to cooperate. He became angry during the argument, stabbing his mother in the living room of the home and his father in the hallway, before leaving the residence.

Follow www.hbtv.us and Paradise 92.7 for additional details on this case as they develop.