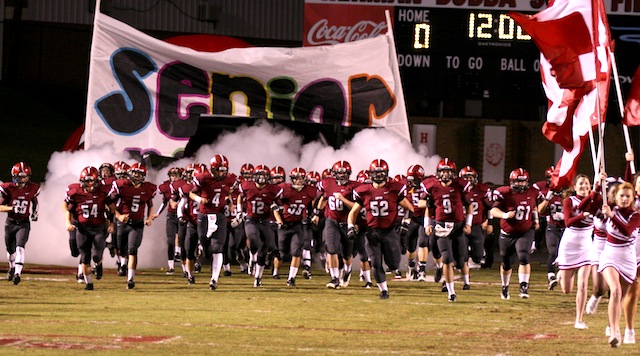 The first round of high school football playoffs begin this week, and several local schools have advanced to postseason play. Here is a list of local and regional schools who will advance and a quick overview of their regular season. All playoff games will be held Friday night at 7:00 p.m.

Phillips- Phillips High School went 5-5 in the regular season. Coach Steve Spiller took over the reins at PHS just a few weeks prior to the start of the season, and the Bears made great strides in their performances this season. Phillips was defeated by Hubbertville, R.A. Hubbard, Hackleburg, Tharptown, and Brilliant and will face Addison in the first round of the playoffs. Phillips finished the season in third place of Region 8 and will travel to Addison who finished as the second place team in Region 6.

Hackleburg- Hackleburg High School finished the regular season with a 7-3 record, after losses to Marion County, Colbert Heights, and R.A. Hubbard. Coach Rod Hudson will lead the Panthers into the playoffs where they will host Ragland. Hackleburg finished as the second place team in Region 8, and Ragland comes into the playoffs as the third place finisher in Region 6. **Special Note: This game will be played at Phil Campbell High School, as the HHS Home field.**

Brilliant- The Brilliant Tigers completed the season with a 6-4 record and was able to pull out a big win against the Marion County Red Raiders to drastically change their season. The Tigers were defeated by Pickens County, Berry, Winfield, and Hubbertville. Coach Jerrod Helms is preparing his team to travel to Valley Head for the first playoff game this week. Brilliant will enter as the fourth place team in Region 5, and Valley Head is the first place finisher in Region 7.

Berry- Berry High School finished with a 5-5 record for the season, losing to Hubbertville, Parrish, Lamar County, Pickens County, and Oakman. Coach Danny Rains will lead the Wilcats into the first round of the playoffs to face Donoho. Berry enters as the third place finisher in Region 5, and Donoho is the second place team for Region 7.

Hubbertville- Hubbertville High School finished the season with a 8-2 record, after losing to Marion County, and Pickens County.  Coach Lamar Harris and his team will host Collinsville this week for the first playoff game.  Hubbertville is the second place team for Region 5, and Collinsville finished in Region 7 in third place.

Hamilton- Hamilton High School finished the season with a 8-2 record, with losses only to Haleyville and Hanceville. Coach Rodney Stidham and the Aggies will host Weaver Friday night. Hamilton finished in second place for Region 7, and Weaver comes in as the third place finisher for Region 5.

Winfield- The Winfield Pirates completed the regular season with a 6-4 record. The Pirates suffered losses in the season to Lamar County, Hamilton, Hanceville, and Haleyville.  Coach David McKinney and the Pirates will travel to Piedmont this week for the first playoff game of the season. Winfield enters the playoffs in third place of Region 7, and Piedmont is the second place finisher in Region 5.

Fayette County: The Fayette County Tigers completed the season with a 9-1 record, after a loss to Pickens County. Coach Lance Tucker and the Tigers will host Opp in the first round. Fayette County enters as the first place team in Region 3, and Opp is the fourth place finisher in Region 1.

Fairview: The Fairview Aggies completed their season 5-5 after suffering losses to West Point, Oneonta, Locust Fork, Guntersville, and Hanceville. Coach George Redding, Jr. is preparing to travel to Haleyville to face the Lions. Haleyville finished the season in second place in Region 8, and Fairview enters as the third place finisher in Region 6.