Lions Send Aggies to the Pound 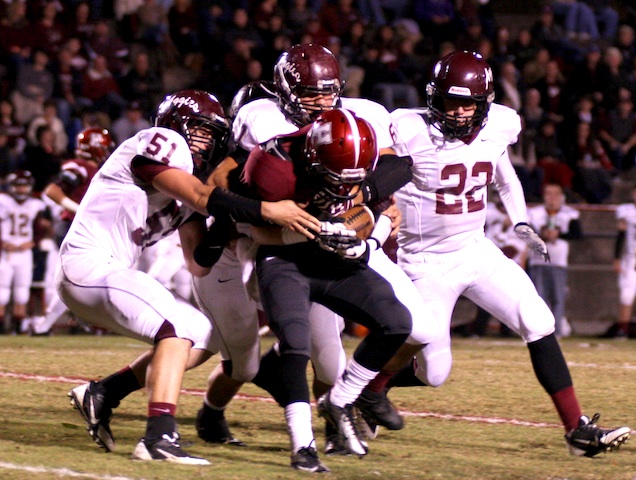 Dillon Posey on a 58 yard reception in Haleyville's win against Hamilton.

Haleyville defeated the Hamilton Aggies Friday night. This was Haleyville's fourth victory in the past thirty-three years in the rivalry game. The win came after a complete group effort by the Lions and great play calls in critical times by the coaching staff. The Lions had 341 total yards of offense, and the Aggies had 268 yards.

The first scoring drive of the game came from a 24 yard Conner Kiser run, and Herrerra's kick was good to give the Lions a 7-0 lead. Next, Kiser scored again on a Heath Self pass to the goal line, and Herrerra again nailed the extra point for the 14-0 Lion lead. Hamilton then returned with two touchdowns but missed an extra point for the Lions to keep a 14-13 lead. Kiser then threw to Brady Sherill for a 51 yard touchdown reception to close the half, and Herrerra completed the extra point for the Lions to lead 21-13 at the half. The first score of the second half belonged to Hamilton, where they scored a touchdown and failed to complete the two point conversion, leaving the score with Haleyville leading 21-19. Next, Sherrill completed a 3 yard run for another 6 points, and Herrerra tacked on 1 more for the Lions to lead 28-19. The final score of the game came with 7 minutes and 48 seconds remaining when Hamilton scored on a 10 yard pass and completed the extra point. The final score was 28-26.

Additional photos and individual stats will be available soon.