Lions Wipe Out The Warriors 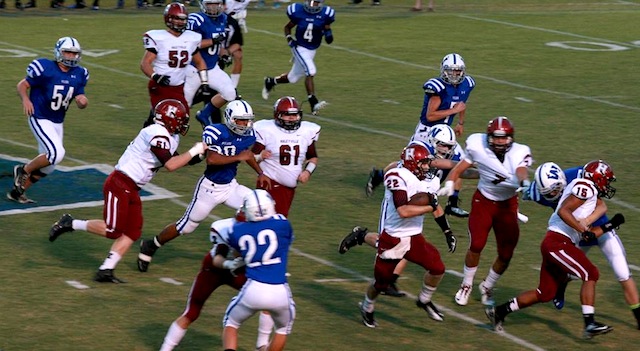 The Haleyville Lions took on the Wilson Warriors Friday night in the second game of the regular season. The Lions defeated the Warriors 38-26. Blake Wilkes served as the only quarterback for the LIons and completed 11 of 20 passes for 250 yards and one touchdown. The first seven points went on the board on a 24 yard pass from Wilkes to Jonas Dodd, and Wilson returned the kickoff to even the score. Next, Brady Sherrill scored a touchdown on a 2 yard run, and Colby Roberts then recovered a fumble and returned it 36 yards to take the score to 21-7. Wilson completed the first quarter with a 15 yard, bringing the score to 21-13. The only scoring drive of the second quarter was a 9 yard run by Ben Richards to give the Lions the 28-13 lead going into halftime. Sherrill had the solo score in the third quarter with a 9 yard run, making the score 35-13. In the final quarter of play, Carlos Herrara scored 3 with a 33 yard field goal, and Wilson scored two touchdowns in the closing minutes of the game to bring about the final 38-26 score for the Lions win.

The Haleyville Lions will face East Lawrence in the next regional matchup Friday night at 7:00 p.m. at HHS.