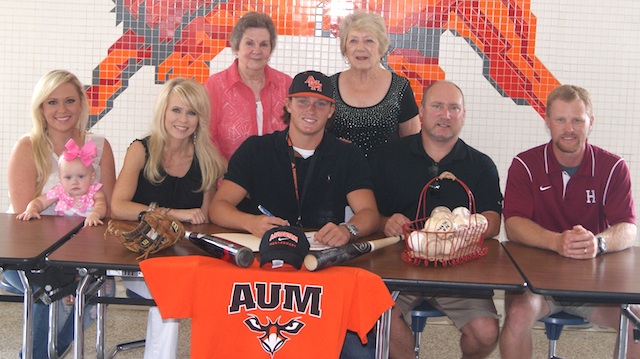 Tanner Ivey, a 2013 HHS graduate, signed a baseball scholarship with Auburn University at Montgomery Thursday afternoon. Ivey is shown in the photo above with his parents, sister, niece, grandmothers, and Coach Todd McNutt.  After scoring 29 on his ACT exam and with a 4.08 GPA, Ivey received multiple academic scholarship offers from universities including the University of Alabama at Huntsville, Birmingham Southern, the University of Alabama, and Samford University. However, Ivey wanted to continue his baseball career while continuing his education and feels that AUM is the right fit for him. Ivey will enter AUM as a freshman this fall and intends to study in the pre-med program. His family stated that playing collegiate baseball and studying pre-med have both been lifelong dreams for Ivey.

Ivey began his HHS baseball career as a starter for the team during his sophomore year. During his time at HHS, Ivey played a variety of positions, including thrid base, second base, and pitcher. Throughout the years, Ivey earned a variety of baseball awards, and he completed HHS Baseball with a .370 batting average and with eight home runs. He was also named to the Northwest Alabamian All-Star Team from 2010-2013.  Coach Todd McNutt stated he is very confident in Ivey's choice, although AUM is special to McNutt.  McNutt also played baseball at AUM and currently holds the school record for the most stolen bases. McNutt stated he is very proud of Ivey and his accomplishments and wishes him well in the next stage of his life.