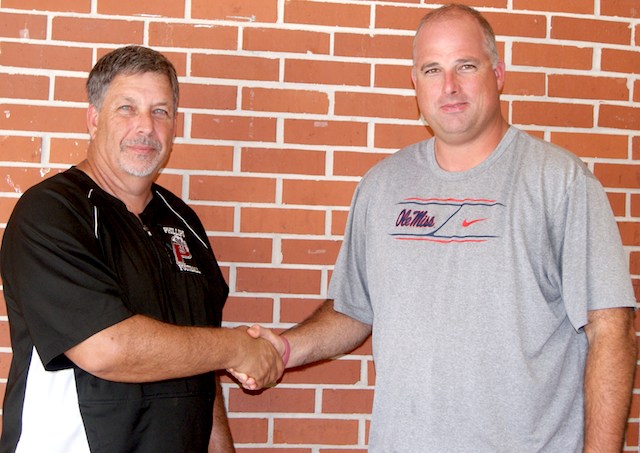 The Marion County Board of Education finalized two hires in the athletic department at Phillips High School this week. Coach Scott Veal was named the new Athletic Director, and Coach Steve Spiller was named the Head Football Coach for the Phillips Bears. These hires were made following the hire of Coach Gary McCarley at Brilliant Elementary School as the principal.

Veal is a 1989 graduate of Phillips High School. He received his Bachelor's degree in Physical Education from the University of West Alabama, and his Master's degree in Education Leadership from the University of South Alabama. Veal has been teaching since 1994, and has been at Phillips Schools continuously since 1999. He earned the title of Head Varsity Boys' Basketball Coach in 2002, where he remained until 2009. Veal led the Phillips Bears to the Elite 8 in 2008 and to the Final Four in 2009. Then, he accepted an offer as Basketball Coach with Northwest Shoals Community College from 2009-2011 until the program was closed. While there, Veal led his team to the NJCAA State Tournament in 2010. During his time at NWSCC, Veal continued teaching at PHS. He also returned as Head Varsity Boys' Basketball Coach at PHS in 2011. Veal also accepted the position as the Head Varsity Girls' Basketball Coach last season.

Last season, Veal led the Bears to a 27-6 season record, won the Area Championship, but suffered a devastating loss to R.A. Hubbard in the Sub-Regional Tournament. The season with the She Bears was not as successful after winning only five games, but he is optimistic looking to the future. Veal stated he is looking forward to continuing to work with both varsity teams at PHS, and he believes the future is bright for both teams. He stated he will continue to work on the fundamentals of the game with both groups, and he is happy with their hard work and dedication to the game.

In Veal's new position as the PHS Athletic Director, he is also looking to make improvements in several of the departments. Veal stated the Varsity Girls' Locker Room was recently updated, and he is appreciative to Coach David Copeland for his hard work to update the baseball field last season.  However, several other athletic facilities will be remodeled and updated in the near future.  Right now, Veal stated his main concern is bringing the football facilities up to par.  He stated there will be an in ground sprinkler system added as soon as football season is over, and the Locker Room will also undergo major renovations. The practice field is also in desperate need for attention, and he hopes to expand and update the weight room for all programs as well.  Veal stated he will work through each issue in each department with time.

Veal stated his main goal as Athletic Director is to bring pride back to PHS. Over recent years, the community support has dwindled away, and he feels the students sometimes struggle with being proud of their school. Veal hopes that through his dedication to the athletic program and upgrades to the athletic facilities, he will be able to restore the pride of PHS and encourage more participation from students in the school. He stated the projects he has planned at the school will cost a substantial amount of money, but he hopes the community will support the athletes and each of the fundraisers planned to fund the updates, and he requests more community participation at all athletic events this school year.

In addition to Veal's appointment as AD, Coach Steve Spiller was named at the Head Football Coach for the Phillips Bears. Spiller is a 1976 graduate from Phillips High School and received his Bachelor's degree in Mathematics Education from the University of North Alabama. Spiller taught at Haleyville High School for the past 29 years. During that time, he served as an assistant coach in the football program for 18 years. Spiller was then the Head Football Coach for the Haleyville Lions from 2000-2008, where he became the second most winningest football coach in HHS history.

Spiller stated he loved attending school at PHS and always wanted to return home to give back to his school.  However, after declining a position many years ago because the circumstances just didn't work out, he was afraid he would never have the opportunity again. Spiller stated he is very appreciative of this opportunity and is excited to work with the great group of guys he has on the field, as well as in the classroom. Spiller stated that his biggest regret about leaving HHS is the fact that he was unable to tell his students goodbye and how much he will miss each of them. Veal stated he is elated with Spiller's acceptance of the football position.  He stated Spiller will be an asset, not only to the football program but to the classroom and community overall.

Although it is early and Spiller is still learning a lot about his players, he stated his number one goal for the year is to make the playoff games.  His second goal is to be the regional champions. Spiller said he is also looking forward to working with Tyler Crumpton this season. Crumpton is a returning All-State Wide Receiver from last season, and he knows Crumpton will be one of several on the team to keep an eye on this year.  He is also happy to have Coach Fikes and Coach Gillum serving as his assistants and working with him to make the transition easier for both him and the players.