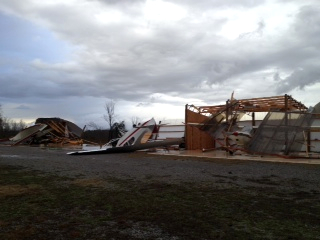 There was some wind damage, especially in the Addison area, but no reported injuries or deaths. Several houses in the east side of the county sustained some damage, mostly minor such as shingles blown off roofs, but no total losses except at the Sardis airport near Addison. The wind completely destroyed a hanger and flipped a small plane upside down as seen above.