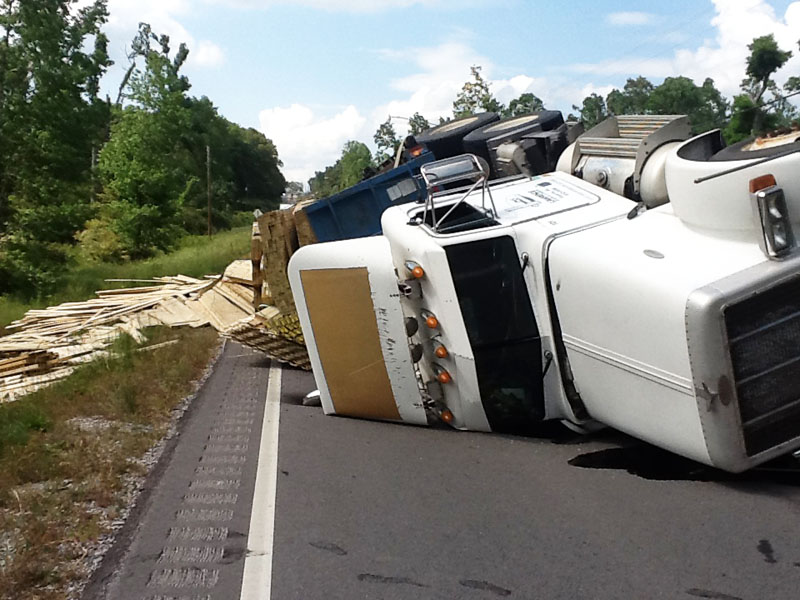 The driver of an 18-wheeler hauling lumber left the road to avoid hitting another car and almost made it back onto the lane safely, but the load shifted and tipped the cab and vehicle. The accident on Alabama 13 South just before House of Brews occurred around 3:20 PM and closed the highway for three hours.

Haleyville Fire/Rescue crews removed the driver from his cab and he was transported to Lakeland Community Hospital. There was no sign of injuries, but he was definitely dazed from the cab flipping on its side.

Crews from Lyle Wrecker Service righted the vehicle and removed it from the scene while city crews used sand to absorb oil on the road and cleared the traffic lanes of lumber.

Just before 6, crews from Lawrence Farm & Lumber in Fayette, the truck's owner, arrived to remove lumber from the side of the highway. At 6:20, the highway was re-opened to one-lane traffic as the crew from Fayette continued to clear lumber.

According to personnel on the scene, the truck driver's maneuver likely saved the life of the 15-year-old female passenger and driver of the car that had stopped to turn left.

Video of the rig and trailer being righted: [CLICK HERE].