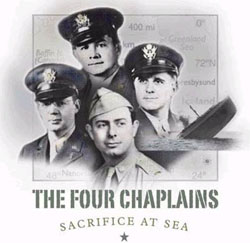 The Haleyville Civitans meeting on Tuesday, February 7, Noon, at the Galley, will honor local clergy as part of Clergy Appreciation Week.

On February 3, 1943, the USS Dorchester was pushing through the treacherous waters of the North Atlantic. With 905 American servicemen aboard, the Dorchester left its convoy a few hours short of its destination. A German submarine, stalking the ship undetected, took this opportunity to fire a torpedo straight toward the ship's stern. The torpedo struck amidships and exploded in the boiler room. Many on board died instantly, and some were trapped below deck. Others, jolted from their bunks half asleep, clambered to reach the decks of the stricken vessel. Taking on water rapidly, the ship began listing to starboard. Because security reasons prevented use of distress flares, escort vessels, still close enough to assist, pushed on into the darkness, unaware that the Dorchester was sinking. Overcrowded lifeboats capsized; rafts drifted away before anyone could reach them.

On deck, amid confusion and terror, Army chaplains George L. Fox, Alexander D. Goode, Clark V. Poling and John P. Washington moved about calming frightened men, directing bewildered soldiers to lifeboats, and distributing life jackets with calm precision. Soon, the supply of jackets was exhausted, yet four young soldiers, afraid and without life vests, stood waiting. Quickly the chaplains stripped off their own and forced them upon the young soldiers. The four men of God (one Catholic, one Jewish and two Protestant) had given away their only means of saving themselves in order to save others. Men rowing away from the sinking ship in lifeboats saw the chaplains clinging to each other on the slanting deck, arms linked together and heads bowed as they prayed to the one God whom each of them loved and served. The Dorchester sank beneath the icy waters of the North Atlantic, pulling with it the four chaplains and 675 servicemen. It is this moment which Civitans annually pause to remember, and in so doing, pause to say thank you to the clergy of their communities.