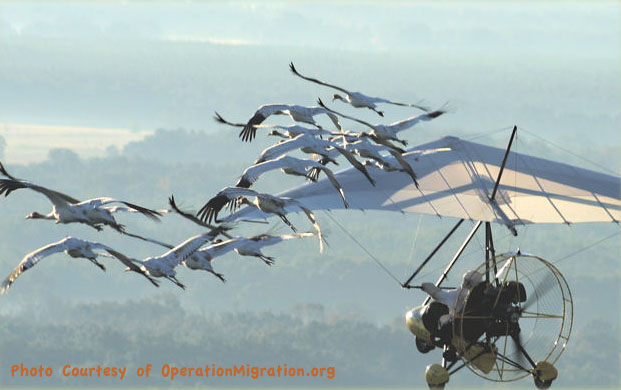 First it was weather, then it was the FAA, now it is rebellious teenagers. Every parent goes through it: that time in life when the teenager wants to steer his or her own course. And perhaps the whooping cranes being lead from Wisconsin to Florida, and now parked near Haleyville, have hit what could be called "avian puberty." This is something along the lines of Fleetwood Mac's "Go Your Own Way."

Sunday's perfect weather was ignored by a young female crane who insisted on taking the lead and heading North. The cranes are now back near their pens, after nearly two hours of the ultralight pilots doing aerial cowboy duties. The migration is now halted. No one can say for sure why. It could be the Sun's position in the sky, temperature, or even hormones according to Joe Duff. Duff is the co-founder of Operation Migration [http://www.operatonmigration.org]. This is his 11th season leading the cranes from Wisconsin to Florida on their annual migration. "They have an instinct to migrate," Duff said. Apparantly, that instinct has been overridden.

The Whooping Crane Eastern Partnership meets this week to decide how to proceed.